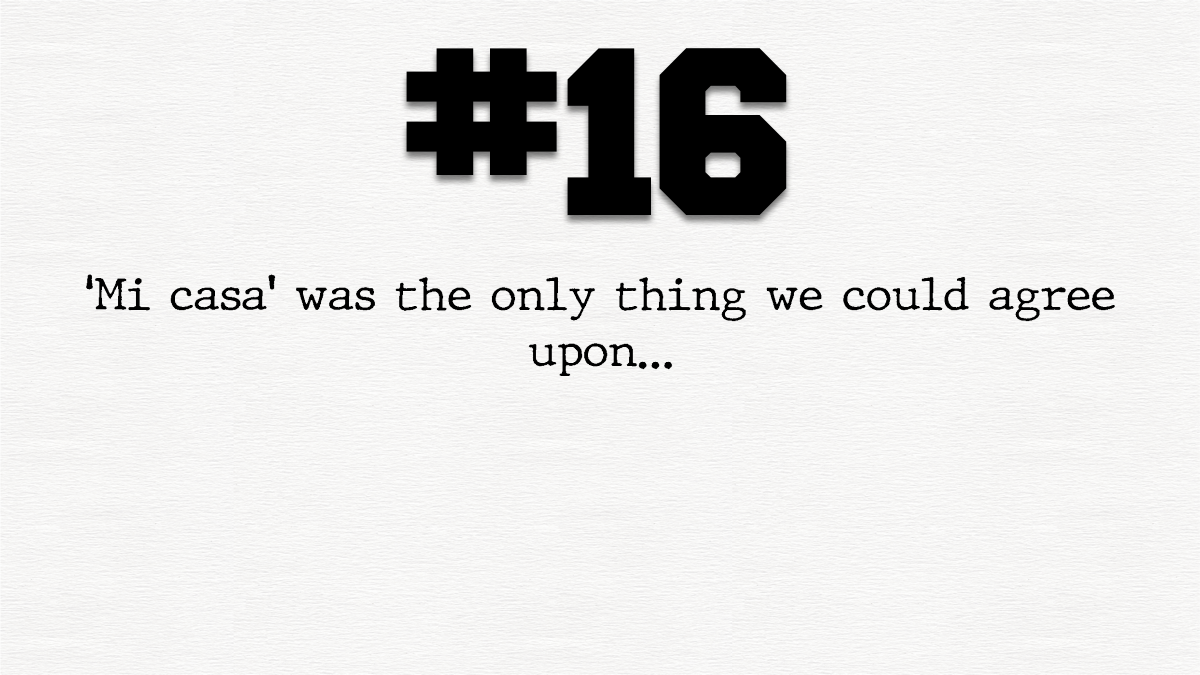 I know enough Portuguese to get a guy to have sex with me. Two words, to be precise:

I didn’t even say those words to Guy #16. Instead I wrote them down on my cell phone for him to read.
Guy #16 nodded in agreement.

For those of you less eloquent than I am: Mi casa means My place, which is short for Hey, your looks attract me to the point I want to do stuff to your body in exchange for stuff you do to mine so that we may both experience pleasure, a potential ego boost and someone to be hung over with the next morning, at my place.
The language of sex dating is very efficient.

Mind you, Guy #16 and I had eyed each other a lot of times before I showed him my invitation. We both frequented the same tiny gay scene. We both knew it would only be a matter of time before we’d do each other. Mi casa merely sealed the bond we had already established.

I guess it goes without saying at this point that Guy #16´s only language of output was Portuguese. After we left the dance floor of our country´s only gay night club we ended up in a taxi. Before we got to the part that included sex, he took me to a place I can only describe as a Brazilian whorehouse, where promiscuously dressed women made half hearted attempts to seduce me, as they did with every man they saw.

I wasn’t sure why Guy #16 insisted on stopping by this shady place at 4 AM in the morning, but I welcomed the experience. I remember it being shady as much as it was gay friendly.

Guy #16 felt at home in this place. Maybe that’s why he had taken me there, as a non-verbal introduction to his life. He introduced me to some of his friends, all of which spoke Portuguese. They all welcomed me into their circle. I might have felt awkward were it not for the alcohol I got offered.

The sun was already rising when Guy #16 and I finally grabbed a taxi again. This time the destination was sex, but the journey was a silent one. Mi casa was the only thing we could agree upon.

When Guy #16 and I finally got around to having sex together, things got lovely. I learned it’s not a big deal if a guy comes quickly, provided he can do it twice.

Only we somehow ended up doing it twice at his place.

Also, I would later find out that mi casa is in fact Spanish, not Portuguese.