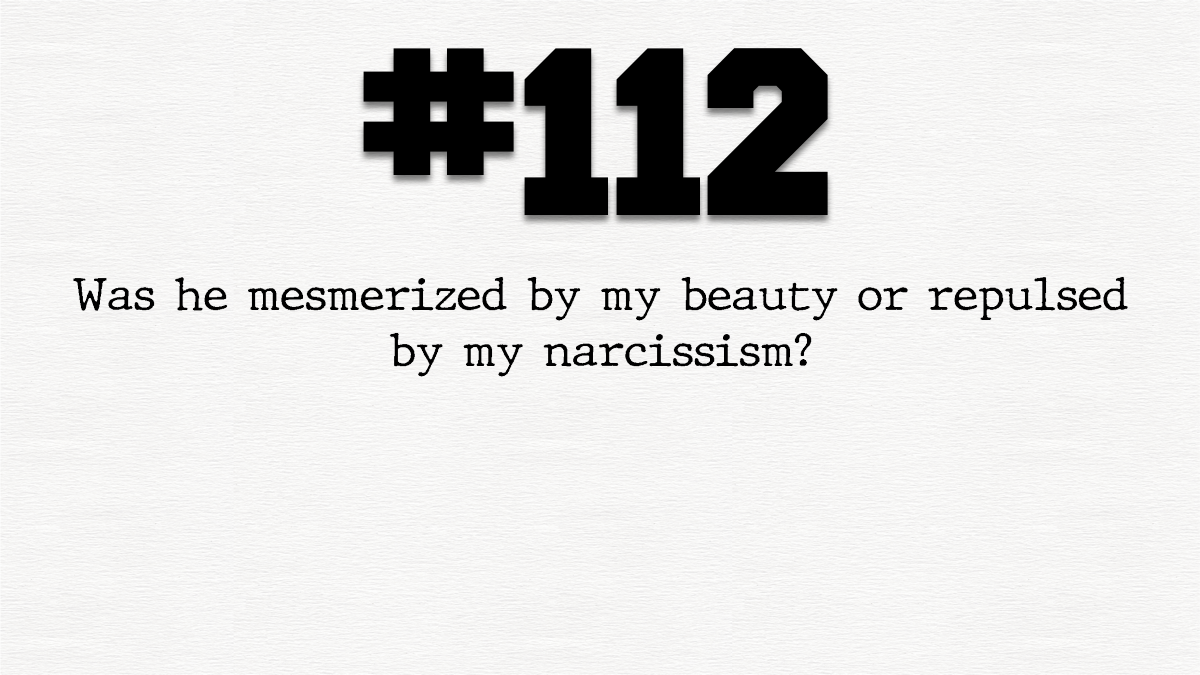 Social awkwardness is like quicksand: The more you fight it, the more you drown.

I drowned the night I met and did Guy #112. I believe we both did, but I will never know for sure. Communication between Guy #112 and me was so bad I can’t even say if he loathed or loved me.

Our online conversation had been cold and curt, our language one of abbreviations:

When Guy #112 and I met up he turned out to be shy, very shy, like embryo at an abortion clinic-shy.

Gayspeak definitely has an Orwellian ring to it, the way it doesn’t allow for any feelings. Only when you meet someone in real life do you get to find out what kind of person hides behind the Gayspeak, which in this case turned out to be a socially phobic mute.

Guy #112 took my coat, sat me down on his couch and followed up on that by not saying anything.
The worst thing was he was visibly uncomfortable, his eyes constantly on the lookout for a place to rest, his body repeatedly changing posture and nothing but uneasiness spread on his face.
I didn’t know what to make of it: Was he mesmerized by my beauty or repulsed by my narcissism? I had no clue.
“So what kind of work do you do?” I asked.
Guy #112 seemed both relieved a conversation had started and at the same time distressed because he had to think of words to say.
“Bank,” was his answer.

It took Guy #112 another few seconds of everlasting silence before he leaned over and reached for my head with his lips. Not knowing what else to do I reached back. Our heads collided mid-couch. It was one of the worst kisses I ever had. His lips were void of any warmth, body or soul. The fact he kissed suggested he was into me. The way he kissed made me wonder he was straight.

The more we kissed, the more I felt the desire to move on, to do anything but linger in this perpetual gray area of consent. I guess undressing someone in a realm of ambiguity can be fun and exciting, but in this case the only thing I felt was Guy #112’s shyness and/or mortal fear: I might as well have been undressing a captured bird.

As Guy #112 and I celebrated our bond by exploring each other’s nakedness it amazed me how Gayspeak had been the prelude to a gathering such as ours. I imagine Guy #112 got to see as little of my personality as I did of his. All we did get to see were our bodies clumsily partnering up to create the act of sex.

I don’t remember how we ended, but it can’t have been climactic. To my recollection the word ‘Bank’ marked the last time Guy #112 and I spoke with each other. What I do remember is wanting to leave as quickly as I could, which I did. The fact I don’t remember any details is probably a testament to how awkward things had been.

The funny thing about Gayspeak is that you know for sure it will lead to sex, but never who you’ll be having it with. It’s literally a computer generated language programmed to facilitate horniness. Sometimes it’s a great way to make friends.