Sometimes Guys on Grindr fail to get the message: That he’s just not that into you.

A good friend of mine introduced me to the perfect emoji for silencing people who fail to realize when the relationship, whatever it was, has run its course. It’s the dolphin.

These days, whenever I used up every available polite way of saying let us not be part of each other’s lives and the only thing I have left is to bluntly tell this person I’m not that into him, I send a dolphin: 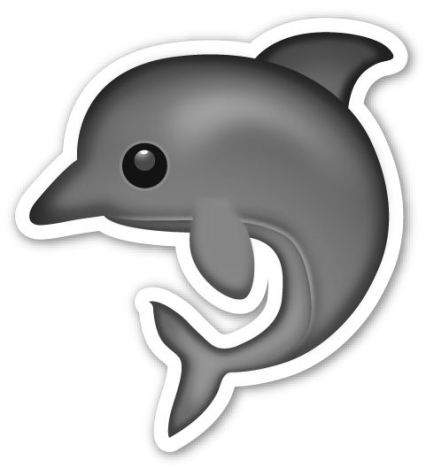 A dolphin is friendly, playful and well spirited. It means I wish the other person well on his journeys.
It also means the conversation is over.

No healthy person enjoys rejecting others. It’s why we go about it ever so gently. The result is an internet full of people who mistake attention for interest.

Guy #124 was old enough to be dating but too young to have even a slight grasp of the complexity of the game.

About fifteen minutes into our dance floor hook-up Guy #124 told me he had wanted me the moment he first laid eyes on me. For me Guy #124 was only my third or fourth choice of all the Guys there. He was young and inexperienced. I was at #124 and had every intention of making it to at least #125 in the near future.

The reason I ended up having sex with Guy #124 is that he was the key to experiencing a tiny part of the local gay scene I had never experienced before: Hook-up motels, where you park your car behind a curtain and have sex in the garage. The country we were in just so happened to be the place where secretive gay sex was very common, so when Guy #124 suggested we’d go there one day, I was curious enough to try.

What I remember most is the motel cleaning lady, the only person in the world who got to look the customer in the eyes, a bearer of secrets if ever I’ve seen one. The sex itself was more or less okay. We could hear the cleaning lady vacuuming throughout.

As we were cooling down in the garage, Guy #124 occasionally asked me to ‘say something’, apparently lamenting the fact I wasn’t as cheerful as I had been on a dance floor. I didn’t say anything. I just couldn’t be bothered.

Yet for some reason Guys like #124 can find in depressing motel room dates the start of something beautiful. And they’re sweet and inexperienced, so you don’t want to be the first to break their heart, so you go easy on them, and you reply when they start texting you the very next day.

You reply without offering any real input for the conversation to go on, yet the other Guy just keeps asking questions, or gives you that one remark that gets under your skin just enough to respond, thinking the conversation will die out eventually like a flame in the vacuum of space.

I should have flippered Guy #124. I should have sent him the dolphin, letting him know I have nothing against him and that I think he’s sweet and reasonably apt at having sex, but that the relationship has ended, because reasons.

The dolphin is the definitive lid on social awkwardness. It’s the most humane way of saying: 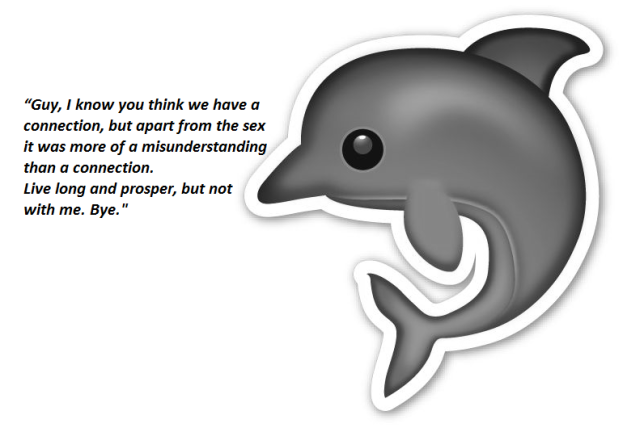 True to form I never reply to a single message from a person I’ve flippered. If a dolphin can’t show them I’m just not that into them, I don’t know what will.

Guy #124 ended up being quite offended when I eventually stopped replying to his text messages. He would not have been had I sent him a dolphin. That would have left him in a gentle but confused state of wonder.

I think ‘flippering’ could be this year’s planking.