Why am I doing this?

If you ever ask yourself that question during sex, that’s a symptom of being involved in very bad sex.

Other symptoms include loathing yourself, wanting to cry and having the urge to punch your sexual partner in the face.

Nothing was really wrong with Guy #58. I was just sad over what had happened with Guy #57. I wanted to remedy my sadness by having sex.

Guy #58 was not at all like his antiquated selfies. He had bad breath. Then there was the fact he spoke Spanish fluently and two words of English, the exact opposite of my linguistic feats.

Guy #58 insisted on assuming that everything I said was a joke. He laughed no matter what I said. It was excruciating.

A friend of mine who reads this blog recently told me I have a problem with having sex out of empathy. I guess he’s right.

The only reason I went on to have sex with Guy #58 was politeness. Part of me wanted to not be with Guy #58, but another part didn’t want to disappoint him. Guy #58 was obviously very happy to be with me. Why else would he be laughing all the time?

As I allowed Guy #58 to go down on me, I did anything in my power to not make it a memory. It helped that I couldn’t understand a word he was saying. 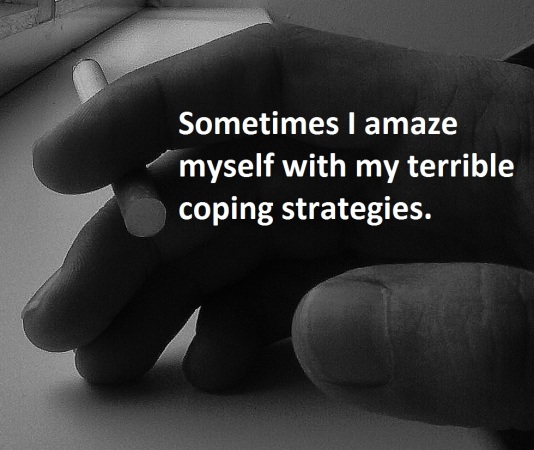 The worst part came when Guy #58 wanted to chill out with me afterward. He wanted to cuddle. I wanted him erased from my brain. You don’t need language to have sex with someone. You need language to wrap it up.
Not knowing any Spanish except Adios, I said Adios and started putting my clothes back on. That’s when the laughter stopped. Guy #58 started a rant. I will never know what he was trying to tell me, but he was visibly distraught over me getting dressed.

Guy #58 might have actually been a nice Guy. He just wasn’t capable of releasing me from my sadness, which I’ll admit was a bit of an unreasonable expectation on my end. I probably wasn’t friendly toward Guy #58. I couldn’t help but resent him for not being Guy #57.
The moment I was fully dressed I held out my arm to shake Guy #58’s hand. For someone who wanted to cuddle up with my naked me, that came as a disappointment. I decided not to acknowledge his disappointment in any way by turning around and leaving his house to catch the first train home.

Sometimes I amaze myself with my terrible coping strategies. Guy #58 was the perfect storm of bad coping: Seeking sex to get over someone –> Having sex out of politeness –> Expecting not to feel sad anymore.

I literally cried myself to sleep the night I met Guy #58.