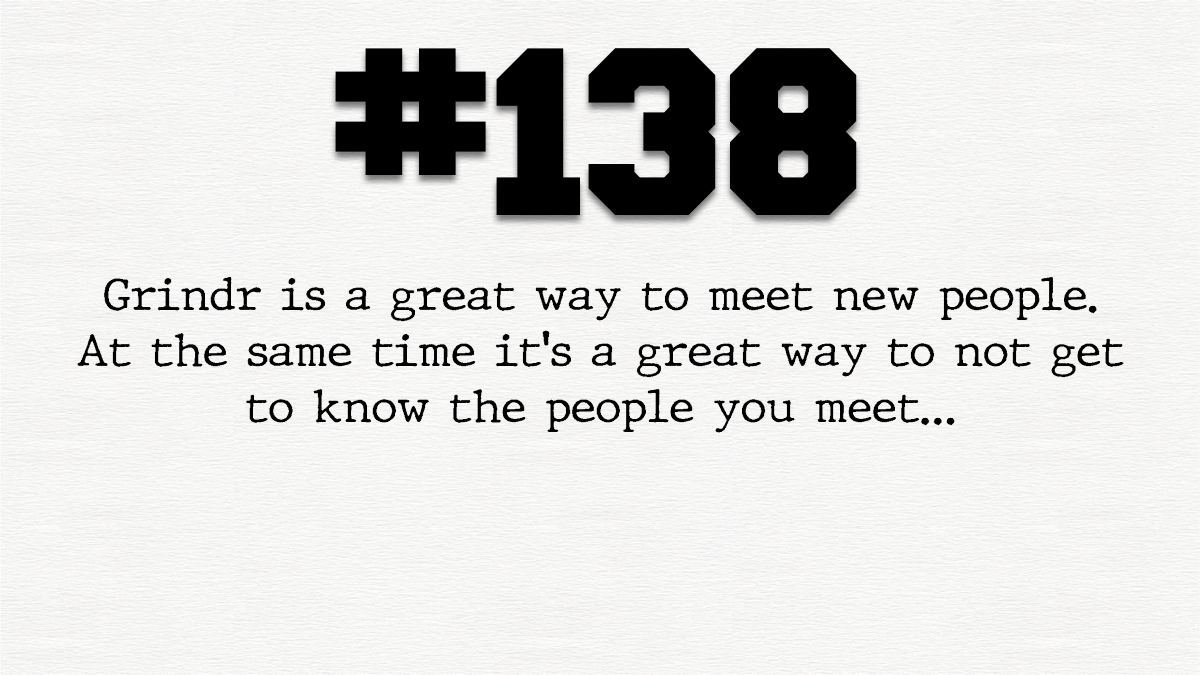 A few years ago my father died. I never dealt with it very well. Sometimes I wonder if I myself want to live at all.

Those were the words Guy #138 spoke toward the end of our date, mere seconds before getting in his car and driving off.

More often than not, a sex date is the kind of thing you don’t want lasting too long. When the physical relationship has played its part, the usual lack of remaining chemistry makes you want to bail out, to get back to your own life, away from any naked strangers.
Guy #138 was a notable exception in that respect. 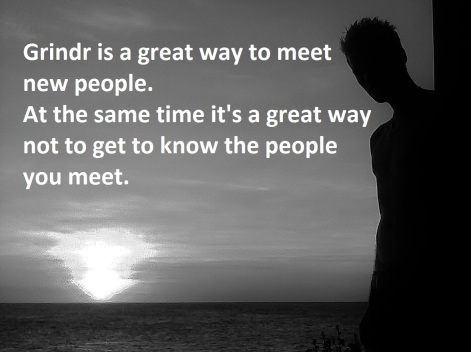 Sometimes clinical depression looks good on a Guy. Before he spoke of his suicidal tendencies Guy #138 had been another good looking human being that had Grindred his way to my back yard, where I had the pleasure of doing him for a good few minutes. It was fun, sure, but our relationship was expressed entirely in movements, cold, concise and deliberate movements typical of a sex date: The silent walk toward the spot we’d be having sex, the somewhat obligatory crotch grabbing, the three stages of foreplay (kissing, handwork and oral), followed by an uneasy intermission needed to get condom and lube in place, followed by doing that thing Guy #138 had in mind back when he said ‘Hi’ on Grindr.

Afterward, Guy #138 and I both lit up a cigarette as we walked back to his car. Our dialogue was brief and in many ways compulsory as our movements had been, yet a few sentences into our conversation he told me about the death of his father and his own subsequent depression.

Sometimes orgasms are but a prelude to social awkwardness and self pity, but I guess they also have a tendency to lower our defenses. Sometimes the relationship stops being one of movements after those movements have climaxed.
Suddenly, seconds before he would drive off, Guy #138 became interesting, his perpetual sadness adding a welcome dimension to his already well defined abs.

Guy #138 had somewhere else to be though. He never intended to spend more than 15 minutes with me. It was only in that final minute I became frustrated by the agreed upon format of our relationship. I wanted to know more of Guy #138. I wanted to hear his story, perhaps even cuddle up with him and let him ponder ways to kill himself.

For the record, I wasn’t being morbid. I was being empathetic.
Okay, I was being morbidly empathetic, but still, I wanted nothing more than to share my good intentions with Guy #138. More specifically, I had glimpsed someone I could connect with, which is what I have in mind each time I say ‘Hi’ on Grindr.

I accidentally ran into Guy #138 about a year later. Our date had taken place in obscurity. This time we met in a crowded and brightly lit place. Good intentions aside, I didn’t recognize Guy #138 when he stood before me and rather enthusiastically said ‘Hi’. He needed to remind me who he was. I tried to make up for my apparent ambivalence by texting him, asking if he would be willing to meet up with me again sometime.
I haven’t seen or heard from him since.

For what it’s worth, I hope Guy #138 is doing better these days, and I guess I would like to run into him again someday and actually be aware it is him. I’d like to know more than just his moves.