If you leave home for a long time, home will not change much during your absence.

When I entered the living room of my mother’s house for the first time in two and a half years, it was filled with family, friends and former colleagues. My mother had thrown me a surprise party to welcome me.

So I chitchatted my way through my surprise party. I truly appreciated everybody for showing up and for taking an interest in me being home, but they couldn’t mask the truth I felt: 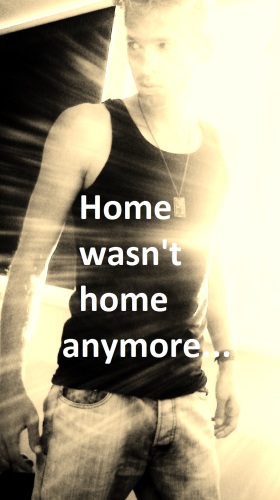 Part of the insecurity I felt all my life expressed itself by doing what I thought was expected of me. Home used to be a place where I did nothing but meet people’s expectations. For a long time I figured I was expected to start a family, get a decent job, get my opinions from the morning paper and generally be the most unimaginative sad stereotype I could be.

And now the time had come to tell my mother.

In the weeks following my return I had been searching for a job. Most of the jobs I applied for would take me abroad again. My mother wanted to know if there was anything pushing me away from the Netherlands, if I wanted to live the remainder of my life out of a suitcase, if I ever thought about settling down with a woman.
I told my mother it would not be a woman.

Being an only child, I could tell my mother was a bit disappointed to learn she’d never be a grandmother. Apart from that she was never stupid or blind. She had suspected my gayness for a long time. She wanted to know if there was anything pushing me away from the Netherlands, if I wanted to live the remainder of my life out of a suitcase, if I ever thought about settling down with a man. And with that my homosexuality had found itself a home in the realm of our issues.

I spent about six weeks in my home country. In that time I struck up some online conversations with Guys here and there, but I didn’t go on any dates.
I felt too alien to get naked with anyone.

It did feel good being back though. It made me realize that, had I never left, I might very well have ended up as some dopey suburban husband who secretly loathed his wife for not having a penis. I wouldn’t wish that upon anyone, or anyone’s wife.

Had I known then what I know now I would have dropped everything and pursued a writing career.

However, my confidence had grown in the field of sexuality and sexuality alone. Careerwise, I still figured doing something in an office was the fuel my talents needed. It would take a lot more Guys for me to figure out where my real talents lie.

My time in the Netherlands was cut short on account of a job I found, a job that required me to spend a few months in the United States, alone, in a hotel room.

My celibacy ended the moment I landed in Wisconsin.

4 thoughts on “Six weeks of celibacy…”