In October of 2009 I landed a job that required me to spend a few months in Madison, Wisconsin. I was given a car, a hotel room, a laptop and a salary. In return I had to spend my days in a classroom getting a basic feel for the software my employer developed.

I did get a basic understanding of how computers work.

I also got gonorrhea.

If you give a predatory gay guy a hotel room, a laptop, a car and money, he will thrive like Donald Trump at a KKK rally. Getting dates in Wisconsin is easy when you have a car, money and a hotel room at your disposal.

www.gayromeo.com, www.adam4adam.com, www.manhunt.net, www.gaydar.com, www.craigslist.com, www.dudesnude.com and Facebook were but a few of the online places where one could get gonorrhea in 2009. Like I said, I had gotten a basic understanding of how computers work.

Guy #49 was as lovely as he was hot. Of all the Guys I had browsed in the Madison area he was by far the cutest, so I hooked up with him first. We had a great evening in my hotel room. He even spent the night with me. I love falling asleep in someone’s arms, even if they belong to a stranger.

When this stranger called me a week later I was thrilled, expecting an invitation for a second date. Why else would someone call me after spending the night with me?
“I’ve been having this weird painful feeling in my ass for a few days,” Guy #49 told me over the phone. It struck me as an odd choice of words to initiate a second date. He continued by saying he had seen a doctor and that he had been diagnosed with gonorrhea.

I had never disobeyed the rules of safe sex, but I guess I did bend them on a few occasions, such as that time with Guy #49. Gays often don’t use a condom when they knock on heaven’s door.

At the advice of Guy #49 I made a doctor’s appointment.
However, before I even made it to a doctor peeing became as frequent as it became hurtful and my penis started secreting slimy stuff as if it was auditioning for a role in Ghostbusters.

I’m all for gay pride, but I didn’t feel much of it when I pulled down my pants in front of my doctor and a nurse.
Two days after that glorious moment I called Guy #49.
“So I tested positive for gonorrhea too,” I said.
“Well, I’m glad we both know now.”
What followed was a conversation in which we both stated it didn’t matter who had given gonorrhea to whom, even though we both thought we had gotten it from each other.

These days a lot of gay guys do more than just knocking on heaven’s door without a condom. Nearly everybody claims to practice nothing but safe sex, yet whenever you get down to it you’ll find that a shockingly large number of people are willing to make an ‘exception’ for you. I don’t think safe sex is the standard anymore.

Sometimes I wonder if there will be another generation of gay guys traumatized by a disease they alone appear to be vulnerable for. Knocking on heaven’s door might not be that much of a metaphor ten years from now. 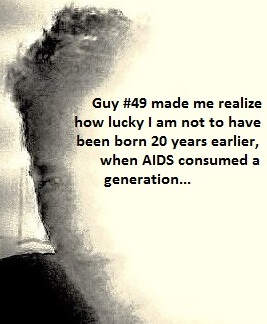 Guy #49 and I never had a second date. Gonorrhea is simply more disgusting than casual sex is pleasurable. Seriously, I wouldn’t wish it upon anyone to be grossed out by their own penis.

It took me one pill to shed the disease from me. Regardless, I felt shame being part of a statistic, a certain group of people that gets an STD. I even felt shame toward my employer. It’s not that I ever told my boss about my Ghostbusters audition, but I did feel bad getting gonorrhea at his expense.

Also, I had to refrain from having sex for a while. Suddenly the hotel room, the car, the laptop and the money had lost their value.

I did learn a lot more about how computers work though.