When you meet someone online you don’t always get to see their teeth right away.

For instance, braces can be hidden by closing your mouth on all your selfies.

Guy #50 was one of the many Guys I had sex with out of empathy. Once again it was a disaster.

I don’t have anything against people with braces, but Guy #50 reminded me of Jaws from the James Bond movies.

Added to that, he was irritating.

He constantly laughed at his own jokes, which often came out wrong due to his dental deficiency.

He constantly interrupted me, which I thought was unfair. I was way better at talking than he was.

Then there was the fact he talked very loud. Everybody in our vicinity could hear him and his teeth. People looked up and saw Guy #50 laughing as if he was controlled by a ventriloquist. They could also see me, cringing my way through the ordeal. Standing in line with him at Taco Bell was what purgatory must be like.

As a result of the social awkwardness I wanted me and my date to end up somewhere isolated as quickly as possible. I knew people were staring at me over the edge of their tacos.

But Guy #50 insisted on eating our food at Taco Bell. That’s the thing with purgatory. It always lasts longer than you expect.

It was obvious Guy #50 was very lonely, having just moved to the city from Mexico. Maybe he actually felt at home in Taco Bell. It was the most Mexican thing our wintry Wisconsin had to offer. 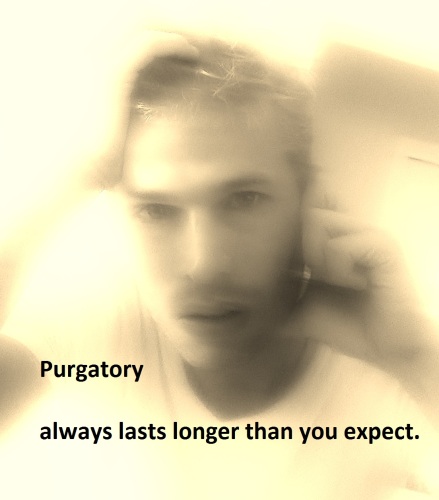 As the evening progressed I came to realize Guy #50 was a normal person overcompensating for looking like Jaws.

I know a Guy can’t help it if he has to wear braces. It’s just difficult not to hold it against someone when everything about him makes you want to leave Wisconsin.

Despite his obnoxious behavior I felt sorry for him. He smiled a lot. I doubt he went on dates often.

By the time Jaws said he wanted to feel me inside of him, I had already reached that unrecoverable stage of self loathing. Titanic’s bow had already gone under so to speak.

God knows why I take the pity route so often. If you have sex with someone out of pity, you inevitably end up feeling sorry for yourself. Actually, it’s not just sex. The pity had taken control over me the moment I agreed to go to Taco Bell on a first date.

And it never ends up well for the Guys I pity either: Because of the sex Guy #50 was under the impression I liked him. However I always follow up pity sex by turning into a ghost. I stop sending emails, text messages or apps. I make myself an unperson to those I pitysex, while they in turn always think of me as relationship material.

I suck at rejecting people.

So instead of rejecting Guy #50 before the sex, I rejected him after, hurting him more than I would had I simply told him he looked like Jaws before he suggested tacos for dinner.

Guess I’m not as good at talking as I thought I was.