Guy #96 lived in Europe. I lived in South America. We had met on the internet. The two of us had a fantastic relationship together. It lasted 1 ½ years.

The first time we saw each other in real life was after 1 ½ years.

We would send lengthy emails back and forth, call each other and talk on Skype for hours, often a few times a week. And of course we also used our webcam for other stuff that could last hours.

At first I was reluctant to open myself up to Guy #96, there being an ocean between us and all. However it quickly became apparent Guy #96 was completely into me, falling for me even. That widened my comfort zone and allowed me to fall for him as well.

Of course it sucked we could never get to the physical part of our relationship, but we both agreed things were fun as they were with a webcam and that neither of us should do anything rash like buying a plane ticket.

I think I realized I was in love around the time I started chatting with him during work meetings. It was great. It seemed like our relationship could only go up. After all, we still had to look forward to meeting each other someday.

We did go up for a long time, until we peaked. We peaked before we ever met each other. There’s only so many things a webcam has to offer.
The thing with falling in love is that we often fall in love with an idea. Fueled by the absence of any physical intimacy, Guy #96 embodied the idea of having an actual loving relationship with someone, someone to maybe grow old with, someone who could be family. The longer our long distance relationship lasted, the more that idea wired itself into my brain. My hormones took care of the rest.

After about a year Guy #96 started acting distant. By that time I knew him well enough to know he wasn’t telling me everything that was on his mind. Slowly I came to learn he had a bit of an avoidant personality.

Instead of hearing about his feelings, pictures of Guy #96 with another Guy started popping up like mushroom clouds on his Facebook wall. Pictures of them cooking together, them sitting in a grassy field together, them celebrating Halloween together. All things people can do together as friends. I clung to the hope Guy #96 had found himself a very good platonic non-sexual unerotic friend which he somehow never talked about.
I started getting officially worried when Guy #96’s mother started liking their friend’s comments: A family was being formed, and I wasn’t part of it. 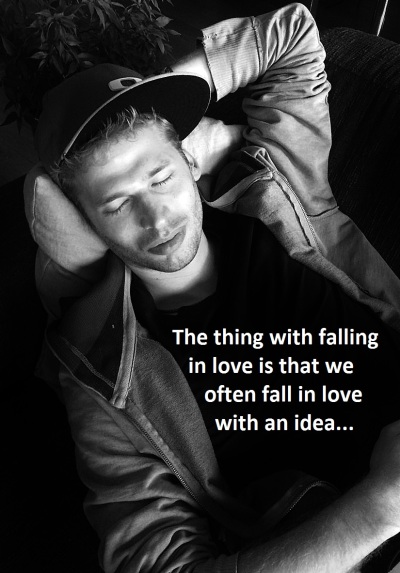 When I visited the Facebook profile of Guy #96’s friend I couldn’t believe my eyes: This Guy was most definitely less attractive than I was. Being a narcissist I accepted good looking competition as a part of life, but average looking competition was a bigger paradox than a Jew at a Nazi rally.

In a desperate attempt to sell myself on my looks I started taking selfies. A lot of them. I would spend hours setting the lighting and contrast buttons just right. And then I would post them on Facebook. I knew the whole world was witness to my vanity, but I was okay with it as long as Guy #96 got to see me and my pretty blue filtered eyes. Every time he liked one of my Facebook photos was a good day for me.

Then came the moment he finally opened up about seeing another Guy. By this time we didn’t chat as often as we used to. Every night he wasn’t online was a bad day for me, because I knew it could mean he was doing stuff offline with his boyfriend, stuff that wasn’t restricted to a webcam. Those were nights I used my webcam to make selfies.

Love can be a bit of a black hole. It sucks you in and before you know it your whole life revolves around one person. I resented Facebook for facilitating my obsession, but I couldn’t help myself: If I couldn’t be part of Guy #96’s life, at the very least I had to be a sad outside observer.

Eventually, I couldn’t take it anymore. I took a month off from work, bought a plane ticket and went to see Guy #96. After 1 ½ years of Skyping our asses off we would finally meet, for real.
Although Guy#96 was now steadily dating his boyfriend, he would often tell me he had doubts about his relationship. I believed him. After all, wasn’t I the better looking option?

People always look different in real life, even if you’ve seen each other a thousand times on a webcam. He made a remark about my lower teeth not lining out as nicely as my upper ones and I mentioned his head was bigger than it looked on screen. Other than that, the two of us got along like we had on Skype.

Guy #96 took me to his place on our first date. Standing mere feet away from his bed I initiated our first kiss. It wasn’t at all like the kiss I had imagined. Instead of feeling relief I could only think about Guy #96’s boyfriend and the fact he had kissed him a lot more than I ever had.
To his credit Guy #96 didn’t cheat on his boyfriend as much as I wanted him to. While we used his bed to dry hump the living daylights out of each other, any hand that attempted to remove clothes, clothes that had come off so easily on our respective webcams, was pushed back the way it came.

For 1 ½ years I had waited to be with Guy #96. Given how much he had wanted me on Skype I figured our hormones would be enough to make him forget about his relationship with a Guy whose Facebook pictures were not nearly as photoshopped as mine.

Reality can be your biggest enemy when you’re in love. What seemed sound, reasonable and even logical in my mind was constantly challenged by it. I did my best to be the smartest, cutest, funniest and all round bestcatchiest me I could be. I knew Guy #96 was into me. He even told me he didn’t know whether to choose me or his other half.

I couldn’t fathom the idea I was fighting a losing battle. After all, wasn’t I obviously the bestcatchiest one on my Facebook page? I had over 100 meticulously crafted selfies to prove it! 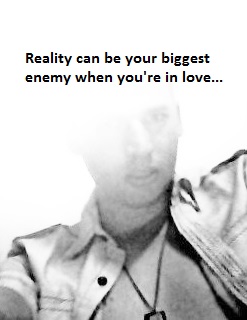 Guy #96 even told me he “kind of wanted to get out of his relationship”. It was around that time I started seeing the pattern:

Whenever I came close he would push me away. Whenever I threatened to leave him and his webcam he would seduce me back in. Guy #96 didn’t want me. He wanted the option of having me. His relationship with his boyfriend played out in front of their friends and families. Ours was a dirty secret. It’s not that Guy #96 didn’t like me and my selfies. He just couldn’t bring himself to inform the rest of the world of it. I believe he feared shame more than hurt.

The month I took off from work was intended to be a catharsis. Instead I flew back to South America feeling drained, sad, frustrated and more in love than ever.

Our ‘relationship’ continued as it had, through the safety of a webcam, but the only thing that grew at this point was the hurt.

So I made a bit of rash decision. I moved back to my home country to resolve our issues once and for all. I actually dropped my well paying job, my life and my more than decent sex life and moved 4000 miles to be with someone who liked me better on a laptop.

Of course relationships only work out when you love yourself, when you’re able to live your own life and when your wellbeing isn’t completely dependent on someone else’s Facebook updates. It’s just ridiculously easy to confuse dependency with love when you’re in love, even more so when you’re a narcissist.

Our relationship had consisted of what would have amounted to thousands of pages of chats, emails and texts, countless hours of webcam sessions but less than a handful of unrewarding dates that failed to live up to even the least of my expectations.
The reason I moved back was because I wanted Guy #96 to make a choice. The distance between us had always been the go to-argument for staying with his boyfriend. Now I had gotten rid of that distance, hoping to even the playing field that way.
The two of us saw each other only once after I moved back. We strolled through the city, smoked a cigarette here and there and talked about him having to make a choice. He still couldn’t.

It was painful, but I realized the only way Guy #96 would ever break up with his boyfriend was if his boyfriend did it for him. Guy #96 never made it clear what he wanted. What he wanted was someone else to want it on his behalf. 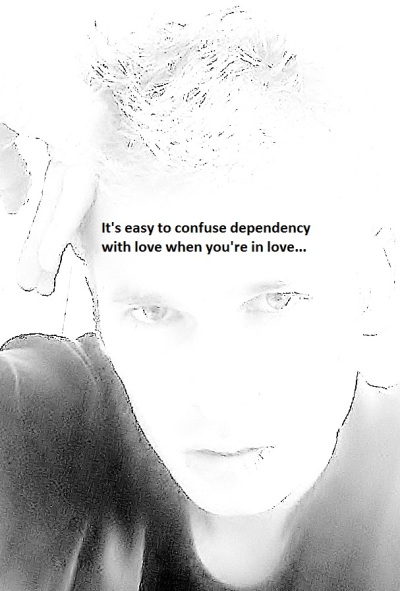 On our last night together Guy #96 told me he had never told his boyfriend about me. It became clear I would never escape the clutches of my webcam. So after surrendering my entire life to the non-existing wishes of Guy #96 I finally made a sensible decision. I broke up with him.

The two of us said goodbye on the same train station we had first met each other. I told him we would not keep in touch online. It was definitely awful saying goodbye to someone I so much wanted to be with but would never see or hear from again. I hugged him pretty fiercely when my train was about to leave. Knowing me I probably cried as well. I really wanted our final goodbye to be as worthy and beautiful as I imagined the two of us could have been. Sadly, our Kodak moment got interrupted by Guy #96’s cell phone: His boyfriend called. The last I saw of Guy #96 was him walking away from me, answering his phone. It was one final blow, telling me I wasn’t allowed to be part of Guy #96’s life.

It was exhausting telling people how happy I was living back in my home country. Few things suck the life out of you like smiling when all you really want is to cry your guts out. For a long time the mere thought of Guy #96 would turn my stomach around, make me angry, sad and of course ashamed of all my desperate selfies.

The thing with love is that the more you realize why something didn’t work out, the happier you are it didn’t. As time passes you realize reality can be a bitch, but it’s never the enemy.

About a year after our not so perfect goodbye I looked up Guy #96 on Facebook once more. It was a test to see if it would still get to me. Fortunately, I found myself feeling happy for Guy #96 when I learned he and his boyfriend were moving in together.
The very next day my laptop crashed. Every picture of Guy #96, every conversation…all of it got deleted from existence. All the proof of our relationship has since been reduced to the memory of a dry hump that ended in tears.

A few days ago I checked out Guy #96’s wall again. It would seem he and his boyfriend have their five year anniversary coming up. Reality knows Guy #96 and me never would have lasted that long.

I guess not making a choice was the right one for him. 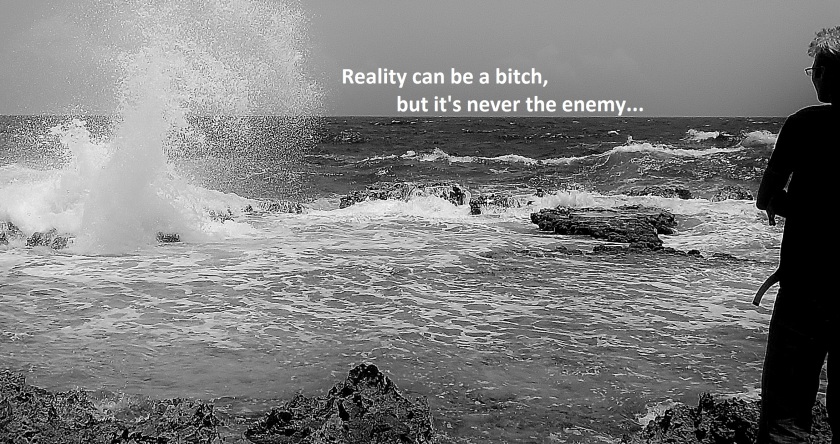