As a gay Guy who frequents places where I face the scrutiny and judgment of other gay Guys, I try to take care of my body. I eat healthy, I even pack a few bananas every week, I run, I go for walks, I hardly ever drink alcohol, I reluctantly do push-ups, I plank until I fold and I quit smoking as often as I can.

The result is a body that, when photographed in a certain light and subsequently filtered in a tantalizing hue, is reasonably hot to look at.

It took me years to become reasonably hot. Being reasonably good looking is a lot of work. The reason I make the effort is because I like my sex to be with Guys that are reasonably hot as well.

Actually, what I’m really aiming for are Guys who I think are hotter than I am, so they can give me the feeling I am in fact more than reasonably good looking. So whenever I have sex with a Guy I deem hotter than myself, I do my best to be the Guy from my selfies, rather than just being me.

Of course, sometimes it’s nice not to look for the hot one, but to be the hot one.

In terms of narcissism Guy #119 gave me the day off. Twice.

Sex can be comfortable when you know you’re the hot one. It takes off the pressure.
Guy #119 had a cute face, but his body reminded me of Elvis in his final days. It wasn’t a pleasant surprise, but I know what it’s like to be chubby and I know how easy it is to live your hotness away.
That’s why I didn’t reject Guy #119 when he turned out to be way fatter than his antiquated Grindr selfies. Instead I viewed him as a little vacation from my vanity: To be with a Guy without having to hold my breath for my tiny abs to show.

Granted, there were moments when I got a little uncomfortable by the amount of fat that crawled its way over and against and around my body, but Guy #119’s cute smile made up for a lot, as did his personality.

I guess Guy #119 marked the first time in my life I had sex with someone I deemed unattractive without it being pity sex. Although maybe I did have sex out of pity, pity for my future fat self.

Guy #119 gave me hope that all people, even fat people, can have sex with people who are reasonably good looking, meaning that no matter what happens to me and my looks, I can always count on my brains to get me laid.

Guy # 119 had used his brains to get me horizontal. Being insecure about the way I look, it was nice to be seduced by brains.

When you frequent places where gay Guys go to scrutinize and pass judgment over other gay Guys, it’s good to be reminded how sexy personality can be. Guy #119 definitely was one of the hottest Guys I ever dated.

Shame about the fat though. Imagine living in a country with only one gay nightclub, anonomously cornered between a gas station and the country’s only Pizza Hut. And you’re pretty much the only white guy there.
You’ll find that of all the people you meet, the vast majority wants to have sex with you.

To me this place was heaven.

After years and years of utter sexlessness I had finally landed in a spot where I was considered hot and doable.

I was like Oliver Twist at an all-you-can-eat buffet.

The problem with all-you-can-eat buffets is that they can unleash one’s greediness. That in turn can lead to bad decision making, like that time I had sex with Guy #7.

When Guy #7 first came up to me, he laid his arm on my waist, pushed his body against mine and gave me one of the friendliest smiles I had seen that night. I remember he had somewhat of a nice body. And he acted nice. He made a point of constantly saying how attractive I was. It was nice to hear someone say it. I didn’t quite consider myself attractive yet, but it was comforting to know someone did.

As the night progressed I sucked up all of Guy #7’s compliments like an insatiable narcissist. My narcissism had unleashed my greediness. I was so flattered a total stranger had come up to me to ask for sex that I neglected to take a good look at this stranger’s face.

That happened the next day, when he came by my house to have the sex we had agreed upon the night before.

When I saw Guy #7 in the bright and unforgiving sunlight and without any alcohol to make him look less like a cartoon character, I realized that of all the guys I could have picked, I chose poorly. It was like accidentally picking something you don’t like at an eatfest establishment.

Any rational being would let a waiter take care of his rejects. But I was Oliver Twist, not known for ever turning down a meal.

Besides, if my sex life were a menu, I only considered Guy #7 an appetizer. It didn’t take long to work through it. We mostly just kissed, naked unfortunately. He was seemingly enjoying it and I was busy accepting the lesson I was being taught: That if I want sex to actually be enjoyable, I had to become picky in choosing guys I have sex with. 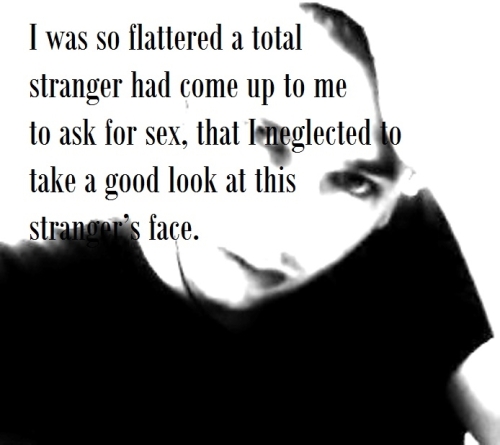 Guy#7 was nice enough to teach me what it’s like to get screwed by your own narcissism.

In that sense he had wetted my appetite.

LENGTH: ±4 years
FORMAT: One-time sex date, followed by running into each other every Friday night for a few years at an end, during which we always acted friendly and amicable to each other
SEX SCORE (0 = drinking a blue cheese smoothie and 10 = the best sex ever): 2