Guy #134 made me realize something.

Car sex is depressing, if not depressingly impractical.

Though I would go on to have pleasurable car sex with Guy #139 a while later, I do believe the idea of car sex sprouted from a lack of options. Sometimes finding a bed to have sex on can be a logistical nightmare. Sometimes a car ends up being the closest thing to a motel room. Sometimes dating is just sad that way.

Guy #134 nor I were capable of hosting a private sex fest. We did discuss the possibility of a motel, but as my date was lamenting his financial situation I realized he was driving toward this one remote parking spot I knew of. Being in a frugal mood as well, I accepted it.

The two of us had sent each other pictures of our naked selves. In anticipation of our date I had imagined us doing the usual fun stuff, like kissing and undressing each other, discovering our nakedness through foreplay. Instead, within seconds of engine shutdown Guy #134 treated me to a hasty French kiss that quickly went south and ended up at third base, where it stayed for the remainder of our date.

While Guy #134 definitely deserves credit for being good at his job, I was mostly occupied with staring out the window, carefully monitoring the movement of distant silhouettes of people and other cars, unable to fully shake the sadness of my situation.

Toward the end of our little parking lot extravaganza I saw two people passing within 50 feet of our car. I could swear one of them was looking straight at me, pushing down Guy #134’s head to make sure it didn’t appear in and out of view all the time.

Guy #139 and I would later have sex in a car at broad daylight and it truly was a little paradise by the dashboard light. Guy #139 was so hot and friendly and handsome and ribbed and on all counts the most beautiful Guy I ever had sex with up till now, I didn’t mind getting caught with him. Guy #134 to me was so much more unremarkable in so many ways the thought of people seeing me with him filled me with shame. It’s not that Guy #134 wasn’t cute. He simply wasn’t special enough for me to take risks for. Preceded by 133 other Guys, a lesbian and a stripper, Guy #134 just didn’t have it in him to excite me the way he might have had he been a two digit number. 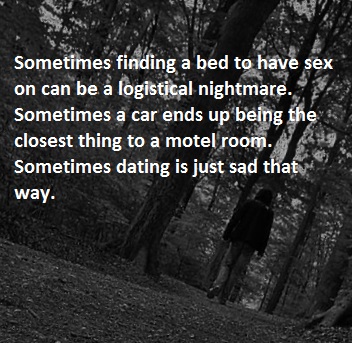 Our home being a small Caribbean island, Guy #134 and I ran into each other several times over the next few years. We would always shake hands, but never engage in conversation, not even when we turned out to have mutual friends and at one point even a mutual ex. My guess is Guy #134 had felt my shame as well. It had made our date awkward and unrewarding and it had consumed our entire relationship. 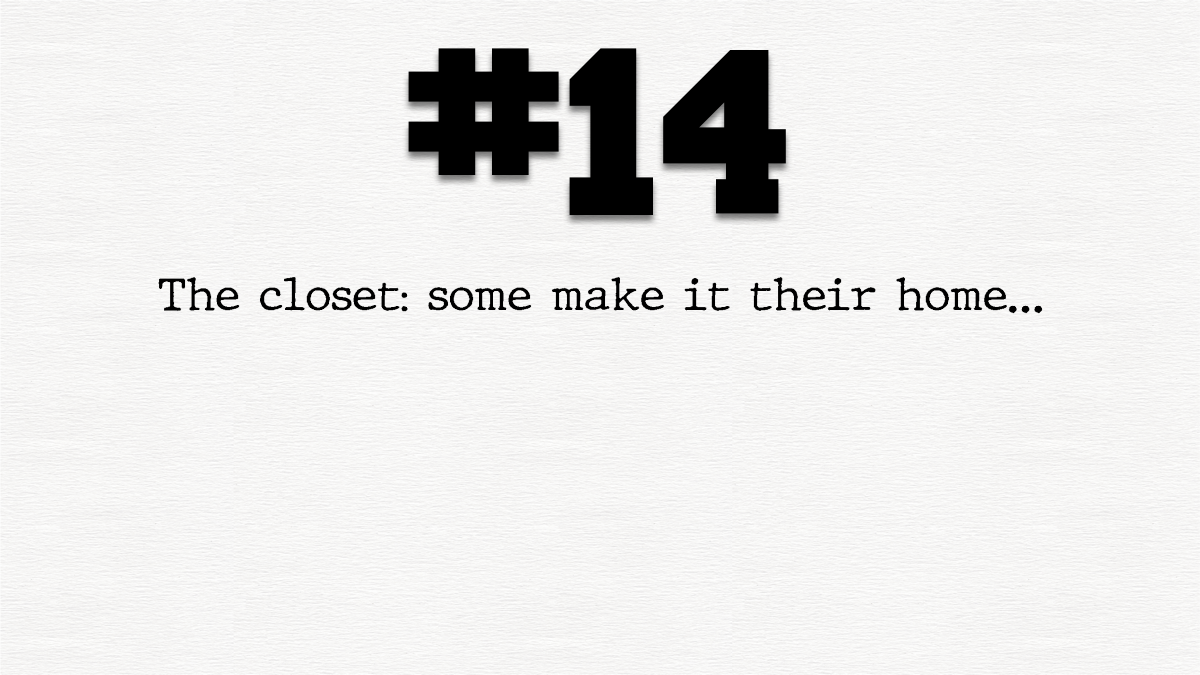 It’s the birthplace of all things sexual, gay and straight. While the majority of closets gets demolished by the end of puberty, some people end up making it their home.

What I remember most about Guy #14 was his house. It was spacious, but mostly because it felt empty. It had everything a person needed: a fridge, a table, a couch, a TV, yet every household object seemed lonely as a comet, aimlessly lost in space. The walls were plain white, without so much as a generic IKEA painting or even an obligatory family photo to give the place at least a hint of an identity. His house was just that: a house, a place to keep the weather out, and with it everything else.

To Guy #14 the closet wasn’t just for hiding the fact he enjoyed other people’s penises so much. His gayness was merely the tip of the iceberg. Everything that I liked about Guy #14, his sense of humor, his wit, his ambitions, his sexuality, all of it was frantically hidden from the possible judgment of others.

In that sense he reminded me of myself a lot. I used to be a bit of a fearful fag myself not that long ago.

After all, when I started dating guys I had convinced myself I was merely being bicurious. Yet here I was, having an actual relationship with a guy, a personal connection with someone I cared about. Guy #14 was probably a turning point for me, allowing me to finally let go of the idea that I must find women sexually interesting.

For about three months, Guy #14 secretly allowed me to be a part of his life. One night, as we were making out in his bedroom, a neighbor suddenly appeared in the garden. Guy #14 panicked and told me to stay in his bedroom, away from any windows. I ended up hiding in his walk-in closet, in the dark, while Guy #14 socially obligated his way through his neighbor’s visit for a good twenty minutes.

I broke up with him shortly after that. I guess it was the moment I decided not to make my closet my home.

Guy #14 unwillingly painted a picture of my life, had I fortified my closet as much as he had. It’s not an ugly picture, just void of any joy, intimacy or love. It’s a picture of sterility.

I hope he someday finds the courage to accept himself for the raging bottom he could have been by now.

LENGTH: ±3 Months, followed by a few years of on and off friendship
FORMAT: Loving relationship followed by pleasant friendship with a slight touch of sex every now and then
SEX SCORE (0 = Doing the Macarena <–> 10 = The best sex ever): 7.5