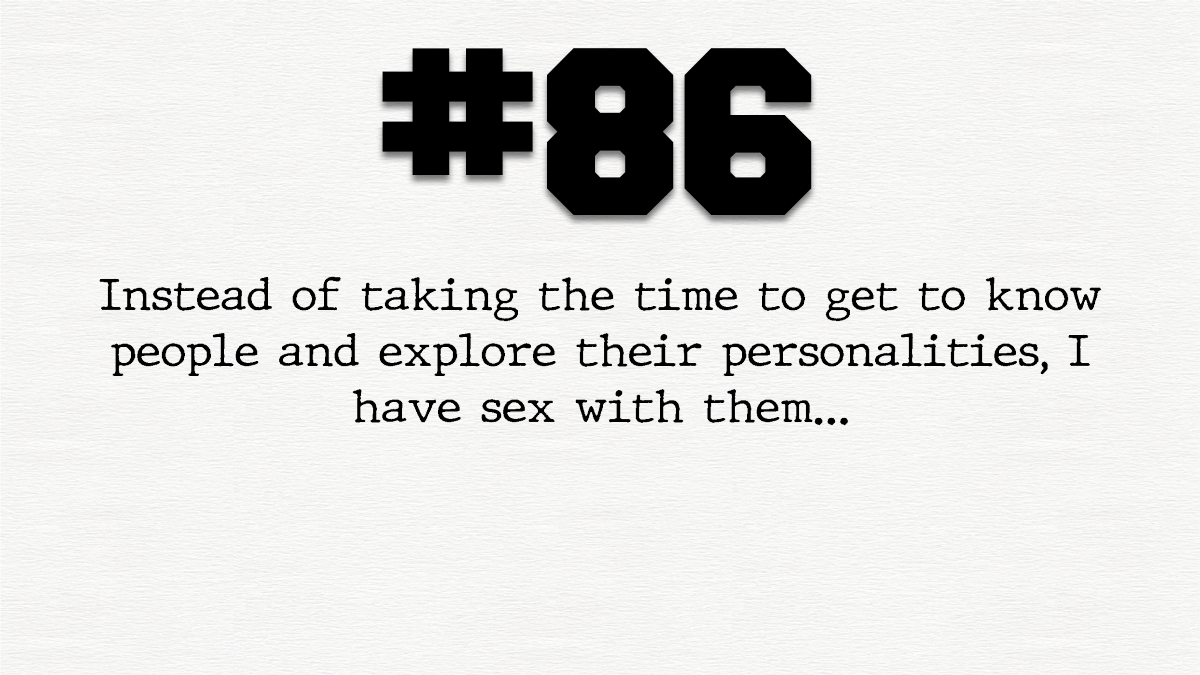 There are numerous reasons why I started a blog about all the Guys I ever had sex with. One of those reasons might be that the one, whether I’ve already met him or not, gets a chance to read about my path leading up to him.

Of all the 168 Guys I ever had sex with, the vast majority only guest starred in my life.

You see, there are two types of gay Guys:

There’s the relationship homosexual, someone who might sleep with no more than ten people in his lifetime, someone to whom inner peace and sexual activity aren’t correlated. Someone like Guy #86.

Then there’s the gay slut, someone who gets plagued by restlessness when sex is absent for more than a few weeks, someone who lives with the knowledge that life will go downhill once he hits 30, someone to whom killer abs make the difference between life and oblivion.

If I had to choose which type of gay I am, I would have to pick the gay slut. (I don’t resent it, but I’m not exactly proud of it either, nor do I have killer abs.)

What I really want is what everybody wants: Love. I would love to be loved by the Guy of my dreams and feel worthy of him at the same time, a combination sluts like me tend to have trouble with.

So instead of taking the time to get to know people and explore their personalities, I have sex with them. It’s what I do. If I meet someone who I think could be the Guy of my dreams, my first instinct is to get him horizontal somehow, to cover the basics if you will.

This is arguably sad. I think every gay slut knows what a sad stereotype he is. It’s the reason why they so often meet up in dark places, to hide the sadness.

Of course, from time to time you can’t help but meet someone who might be, as they say it, relationship material.

Guy #86 was such a someone. He was smart, educated, sort of funny, cute and Latino. He was of the ‘relationship type’, meaning he considered our date an acquaintance, a casual introduction to find out if our personalities matched.

I on the other hand was a slut, too afraid our personalities might not match, afraid Guy #86 might reject me over something I had no control over, like what kind of person I am. 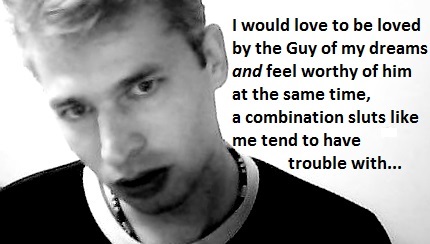 One of the first things Guy #86 told me was that he never had sex with Guys on a first date, saying he found it shallow and unrewarding. I responded as any slut would: I told him I wasn’t in it for the sex either, that I much rather wanted to connect with someone.

I went along with Guy #86, complaining about the shallowness of the gay scene, about how so many Guys want nothing but sex and how it’s impossible to establish a meaningful connection with anyone, how gay saunas are dirty places where hope goes to die, how poppers are so very bad for our brains, how sex is only pleasurable when there’s love involved, yada yada yada…

I nodded, I smiled and I agreed with #86’s cute Latino face. I empathized, made him feel comfortable, understood and at home. I pretended to be touched by his words and struck by the connection I felt with him. I asked him to show me his favorite music on Youtube and then gasped for air. That’s how much his Mexican folk music had touched my soul.

I’m a slut. Seducing Latinos is my specialty.

It took me a few hours to strip Guy #86 of his defenses. And then I kissed him. Carefully, almost apologetically at first, as if I too wasn’t the type to initiate sex on a first date.

And then we had awesome, passionate, mind blowing and even loving sex, on his floor, against his wall, in his kitchen and even on his bed.

Once again I had proven myself doable. For a brief moment I felt myself worthy of the very love I was depriving myself of. I, the great Lennard van Ree, had managed to cover all bases on a first date with a very cute Latino relationship type, or as they say in slut terminology: Score.

Guy #86 didn’t quite share my enthusiasm. He loathed himself after we were done, having turned into a sad puddle of regret mere seconds after coming.
He knew he had been tricked into having sex, but he couldn’t exactly put the blame on me. He had enjoyed himself every bit as much as I had, particularly the part that involved the two of us against his wall.

Because the sex had been so good I was ready to get to know Guy #86. For the first time during our date I showed a sincere interest in him. I even wanted to hear more of his music.

Guy #86 however was too busy mourning his shattered principles. I tried to establish the connection we had felt during sex, to no avail.
It saddened me to see Guy #86 be so hard on himself. Had it been up to me, we would have spent the night together, talking, making love and listening to Mexican folk songs. I really wanted us to get to know each other. Assured in the knowledge he deemed me doable I was no longer afraid to open up.

Sadly, Guy #86 was now more interested in picking up the pieces of his former self than in knowing me or my silly taste in music. He made it clear our date was over. I wanted to kiss him when we said goodbye, but he barely allowed me to hug him.

I tried to score a second date, but only half heartedly. I knew any attempts from my end would be futile. I had consumed Guy #86 too soon. We sent a few text messages back and forth. It took Guy #86 a few days to rid himself of his guilt. But he knew very well sex would only be in the way of our relationship, because I would want it again on a second date.

If my the one is reading this, please note: I will try to consume you on our first encounter. You need to decide if you’re okay with that.
If not, that’s okay.

Just don’t believe me when I say your taste in music touches my soul.