In a gay sauna, there are three types of Guys:

Cruising through a gay sauna, you try to avoid the nontouchables, attain a casually ambivalent attitude toward the touchables and follow the movement of the few untouchables like a hawk.

Catching an untouchable is a rare delight, like finding out ABBA is back together or not testing positive for gonorrhea even though your previous date did.

Given that my hunting strategy consists of passively waiting in a corner till an untouchable touches me, I usually settle for having sex with a touchable.

That’s not a complaint by the way. I’m way more at ease in the presence of someone I deem myself worthy of, making it fairly easy for me to suppress my issues. If touchables have taught me anything it’s that looks and chemistry only correlate when you let them.

Guy #194 on all accounts was a great touchable. He was attractive and made an effort by coming on to me. Although I was aware of the presence of some untouchables nearby, I forewent the ache of silently hoping for them to hit me up by enjoying the enthusiasm Guy #194 showed.

Sex with Guy #194 as it turned out correlated with his enthusiasm. Even though we had hardly spoken, the way we communicated our sexuality told us we were likeminded, two people who might have similar interests, a shared sense of humor or appreciation for ABBA music. The similarities weren’t acknowledged, but the sex made them feel very likely. And I wasn’t even that high!

Afterward we did speak a little. I told him I had recently written the fictional diary of Kim Jong-un as a novel. Guy #194 responded by giving me his phone number and asking for the link, so he could read it. I was flattered by his interest, which seemed sincere, especially considering I wasn’t all that high.

After lying next to each other for what may have been fifteen minutes or so, I told Guy #194 I was going to cruise some more. He seemed a tad disappointed, but also very accepting.
“I had a great time with you,” I said, hoping to make me walking away and looking for other people to have sex with less awkward.
“You too,” Guy #194 said, “I caught the cutest Guy in the sauna.”
“Really?” I asked, wanting to milk the compliment as best I could.
“Yeah, I saw you and said to myself That’s the Guy I want to hook up with tonight.”
“Wow, thank you!,” I said and walked away, making it all the more awkward I was doing so to have sex with other people.

I needed the compliment, badly.

It thrilled me Guy #168 was also there, allowing me to show off how much of a catch I was. At the same time it was a frustrating experience, as the good parts of me jumped off a cliff each time Guy #168 came near. There was definitely some chemistry between the two of us, but I was all but incapable of channeling it into something sexual. He was, as one might call it, an untouchable. So instead of trying to have sex with Guy #168, I wondered off, hooked up with Guy #194 and got labeled an untouchable myself.

Yet instead of revelling in Guy #194’s adoration, I left him to find Guy #168 to tell him I just had awesome sex and that the Guy I’d gotten it from thought I was the cutest Guy in the sauna.
“Ow,” Guy #168 replied with a rather heartless ‘good-for-you’ inflection.
“Turns out I can be a good bottom to the right Guy,” I continued, trying way too hard to point Guy #168 to my finer qualities as a human being.

Guy #168 was probably the most dysfunctional crush I ever had: I met the wonderful Guy #194, he thought I was the cutest Guy around and even wanted to read my book. Had I bottomed for him another time, I might have actually sold a copy.

Instead I just wanted Guy #168 to know how awesome some random Guy thought I was. I never even got around to sending Guy #194 the link to my book.

I guess when someone labels me an untouchable, I really play the part, treating Guy #194 as Guy #168 treated me, getting my karma served to me instantly.

Thanks a lot, universe! 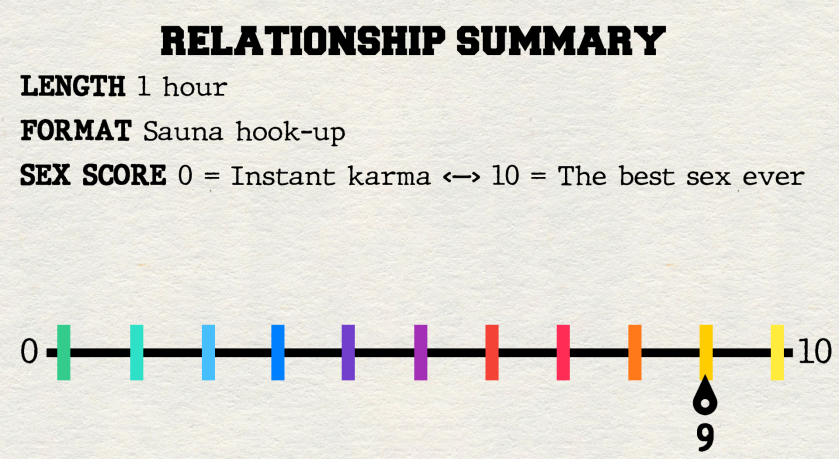